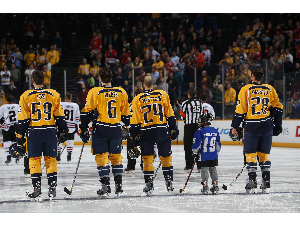 Skate alongside Predators players during the National Anthem at the Tuesday, February 17th home game vs. San Jose Sharks. This package includes four (4) lower bowl tickets and a photo capturing of the experience. Must be age 8-18 and know how to skate.