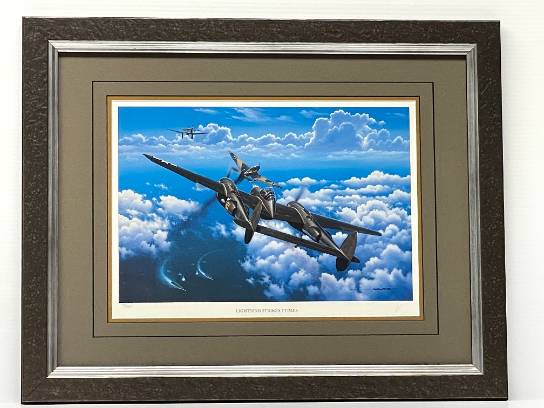 Col. William Leverette was a Lockheed P-38 Lightning ace with the 14th Fighter Group who attained 11 confirmed aerial victories. This custom framed and matted print depicts a mission on October 9, 1943, when Leverette's flight of six aircraft rushed to the defense of a British cruiser and several destroyers that were under attack by a large group of enemy JU-87s and Ju-88s. In an exciting 15-minute air battle, the P-38s managed to down sixteen Stukas and one Ju-88. Leverette was awarded credit for seven of the German bombers.

Note: Print comes with certificate of authenticity. Lot available for pick up after The Gathering 2021. Shipping at winning bidder's expense. Piece measures 24.5 inches x 19.5 inches. Number 192 of an edition of 4750.