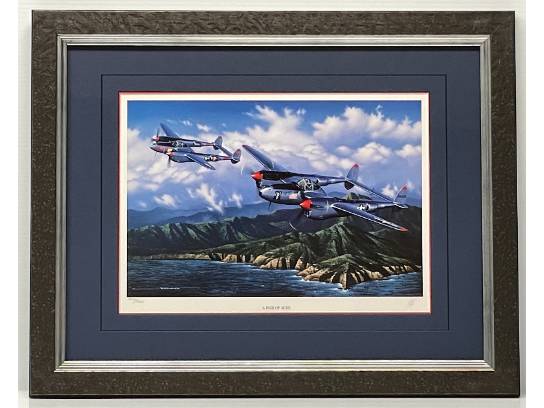 The P-38 was to prove to be one of America's top fighters of World War II. The Lightning was fast, very heavily armed, had excellent range, and a great rate of climb.

Maj. Richard Bong, the highest-scoring U.S. ace in WWII, was a Wisconsin native who achieved 40 confirmed victories. His squadron mate Thomas McGuire was credited with 38 victories, and the two flew together regularly. Both received the Medal of Honor and both flew aircraft named after women who would become their wives.

This stunning custom framed and matted reproduction depicts both Bong in Marge and McGuire in Pudgy over the Southwest Pacific in 1944.