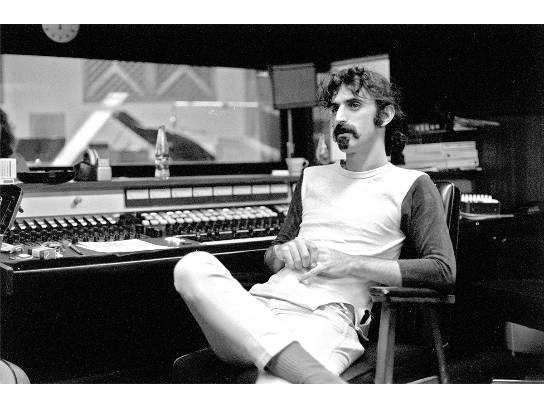 ARTIST'S STATEMENT: Frank Zappa at the console of Whitney Studio in Glendale, California, during the recording of his seminal Hot Rats album in late August 1969. This image is from The Hot Rats Book, published in December 2019 by Backbeat Press, and already in its fifth printing.

ABOUT THE ARTIST: Bill Gubbins has had a distinguished publishing and media career, including editing national magazines such as Creem, Moviegoer, and Country Weekly, among others. While at Whittle Communications, he was a founder of Channel One, the Peabody Award winning in-school newscast. He currently operates Gubbins Light & Power Company, a consulting firm creating custom media properties for clients including T-Mobile, Microsoft, The Atlanta Illuminarium, and Red Robin restaurants. Gubbins is also a fine-art photographer and photojournalist whose images have been published in the New York Times, Rolling Stone, the Los Angeles Times, and The Guardian (UK), and have been exhibited in the U.S. and Europe, with solo shows in Los Angeles, Detroit, Nashville, Bad Doberan (Germany), and Klagenfurt (Austria). The Hot Rats Book, a collection of Gubbins' never-been-seen-before photos of the 1969 recording of rock legend Frank Zappa's seminal Hot Rats album, was published in December 2019 by Backbeat Books and is already in its fifth printing.In addition, a Gubbins' photo from the book is being used as the signature poster and branding image for Zappa, the coming Magnolia Pictures' biopic directed by Alex Winter.