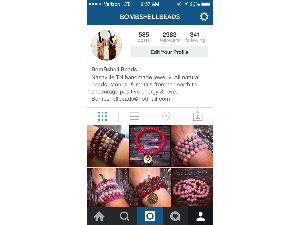 BomBshellbeads is handmade jewelry with all natural beads, stones, & metals from the earth to encourage positive energy and love! It was founded by a local artist in Nashville TN who wanted to offer bracelets and necklaces that were customized to each individual person. Each piece she creates is a limited edition and one of a kind.