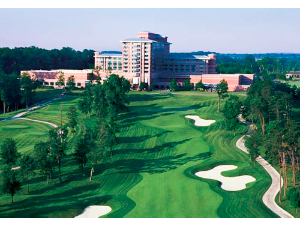 In the heart of Northern Virginia's Wine Country, Lansdowne Resort awaits you. Warm hospitality and gracious country manor decor surround you with comfort.
One night accommodations for two, breakfast included. Hit the links on the championship golf course created by world-renowned course designers Robert Trent Jones, II and Greg Norman. Explore the surrounding countryside and the beautiful Potomac River at Tarara Winery. Enjoy a wine tasting for two at the tasting bar. Package includes a bottle of 2004 Dom Perignon.