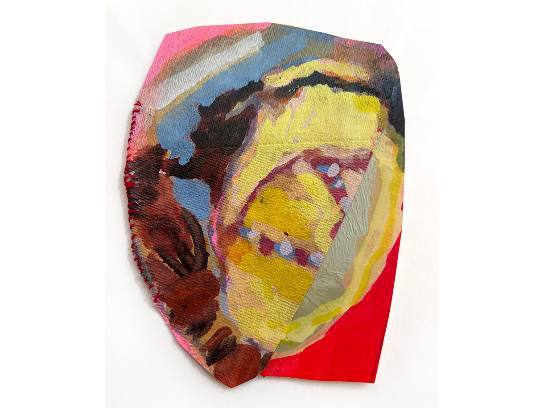 Cake is from a series of paintings made at home during the pandemic. It grew out of a group of large paintings from 2019 called Centerpieces, works focused on table decorations from source photographs of the 1960's. The materials are scrap household linens.

Elise P. Church was born Boston, Massachusetts in 1965. She has had solo exhibitions at Happy Lucky No.1 Gallery in Brooklyn, Gallery Molly Krom in New York City, Roy G. Biv Gallery in Columbus, OH and at the Catskill Arts Society in Livingston Manor, NY. Her work has been exhibited in selected group shows in New York, Massachusetts, Venice, Paris and Bermuda and has been accepted into the The Drawing Center Viewing Program and Peirogi Gallery Flat Files in New York. Elise received her Bachelor of Science at Skidmore College, NY in 1987 with a major in Fine Arts where she won the Philip Guston Material Award for painting. She was a finalist for The 2019 Alexander Rutsch Award and Solo Exhibition in Painting. She was a 2019 fellow at the Virginia Canter for the Creative Arts for which she received a Mid Atlantic Arts Foundation Creative Fellow Grant, a resident fellow at Yaddo in 2017 and The Ora Lerman Charitable Trust, Soaring Gardens Artists' Retreat in 2016. Elise lives and works in Brooklyn.