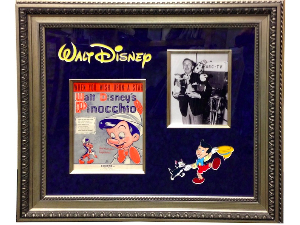 Walt Disney original 1940 signed Pinocchio sheet music for "When you Wish Upon a Star", with a wonderful photo of Walt with his "friends". Pinocchio is dancing with Figaro the Cat in the matting, and the ever present Jiminy Cricket stands guard above the photo. Generously Provided By: Antiquities International. Fair Market Value: $5,995