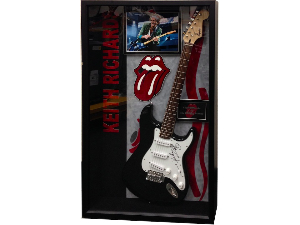 Autographed guitar by one the founding members of the Rolling Stones, Keith Richards. Framed with a great performance photo of Richards in a custom shadowbox display. Generously Provided By: Antiquities International. Fair Market Value: $3,495