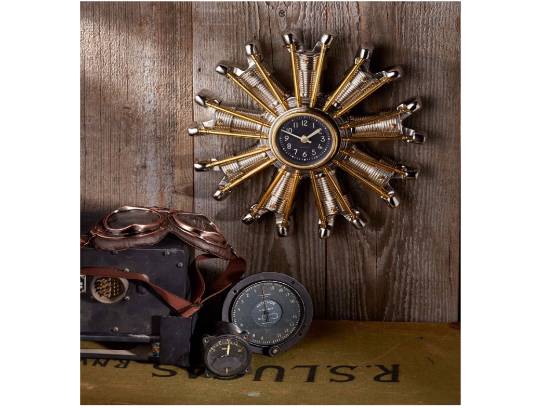 Never lose track of time with this historic powerplant clock. First developed in 1904 for aircraft use, the radial engine became one of the most reliable means of power for aircraft in WWI and WWII, and is still in use around the world today. Charles Lindbergh used a radial engine in the Spirit of St. Louis for his historic flight from New York to Paris in 1927. Because their power-to-weight ratio was better than most inline engines, radial engines became popular not only for aircraft but also for vehicles such as tanks, and later, helicopters. This powerplant engine clock is representative of the type of radial engine found in US aircraft from the 1920s through the 1940s, and its dimensions are 14 inches tall x 14 inches long x 3 inches wide. It weighs approximately 8 pounds.

Donated By Pendulux and EAA