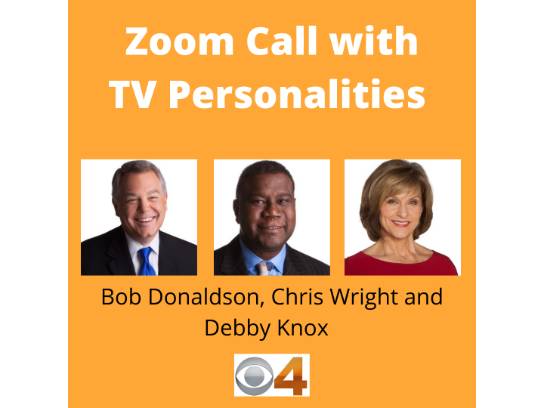 Have you ever wondered what goes on behind the scenes at a news station?

Are you an aspiring news anchor?

Do you see yourself sitting down and chatting with three Hoosier television legends?

Then this package is for you! Enjoy a 15 minute Zoom call with CBS 4 personalities Bob Donaldson, Chris Wright and Debby Knox!

For nearly three decades Bob Donaldson has been at the center of news coverage in central Indiana. He continues to thrive today in the evening anchor role at CBS4 and has become the longest tenured male anchor in the Indianapolis market.

CBS4 Chief Meteorologist Chris Wright joined the Indianapolis Weather Authority team in 2014 having served as a chief meteorologist in Indianapolis for 22 years. He is also an accomplished author and has written 10 mysteries, available on the Amazon Kindle, and two children's books.

Emmy-winning anchorwoman Debby Knox has been a staple in Indiana homes for more than three decades. While her main focus was in the area of health and medical technology, she is also known for her one-on-one interviews with prominent newsmakers, including Presidents Barack Obama and Bill Clinton and Secretaries of State Madeleine Albright and Colin Powell.