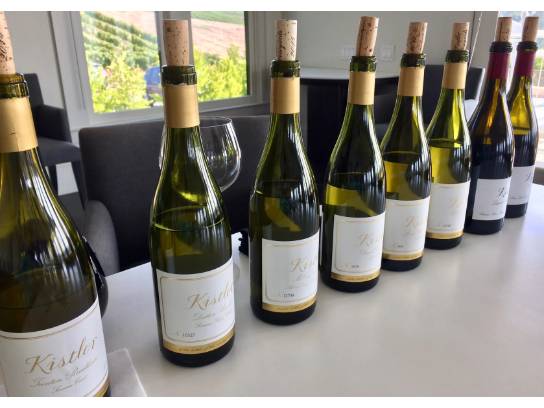 We've pioneered Rhône varietals in Washington for over two decades. In partnership with several dedicated growers, we began with a vision, believing that these grape vines would succeed in an unproven region. In 2000, Jim planted Mourvčdre, Counoise, Roussanne and two additional clones of Syrah. From these vines, we released the State's first Counoise and created a new Southern Rhône-style blend named 'Sirocco', comprised of Grenache, Mourvčdre, Syrah and Counoise. In 2003 he added Grenache. Then in 2004, Dick planted Marsanne, Grenache Blanc, Picpoul and Cinsault at a site very near the 'Grande Côte.' Most of the cuttings for this vineyard were obtained from Tablas Creek Vineyards whose parent company is Chateau Beaucastel in Chateauneuf-du-Pape. The Ciel du Cheval Mourvčdre, Counoise, and Roussanne are also Beaucastle stock. A modest beginning with Grenache in 1989 has grown to over two dozen acres of ten Rhône varietals. Since the original plantings, we've now established a fourth wonderful source with Joe Hattrup who owns Elephant Mountain and Sugarloaf Vineyards, located at the western end of the Yakima Valley. From there we source Syrah, Grenache & Mourvčdre and small amounts of Counoise and Cinsault. Championing these grapes has required perseverance and careful site selection to assure their survival in Eastern Washington's cold winters. The State's volcanic, glacial soils, combined with the arid, desert climate provide an ideal setting for complex, fruit-driven wines. We're very proud to be at the forefront of this remarkable adventure. McCrea Cellars is owned and operated by two couples. Doug and Kim McCrea have their home at the winery site with their two sons, Kevin and Kalen. Sales & Marketing Manager Susan Neel lives in West Seattle with her husband Bob who serves as our operations manager and chief engineer.