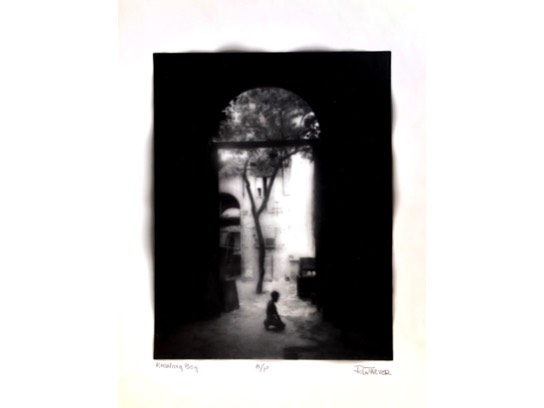 Kneeling Boy is from the series Havana: A Place Out of Time 1999. Havana is lethargically energetic, immaculately filthy, an illusive illumination. It is a wonderful contradiction. For every answer given to explain Havana, there are dozen more questions. It is a society held together by ingenuity, floating on an outdated dream.

These images are an attempt to reveal what is beneath the contradiction: the place boiled down to its essentials offering a different interpretation of the city. One that creates a sense of poetry and wonder. And like the city itself, conjures more questions than answers.

Photographer Ron Tarver received a BA from Northeastern State University (OK) and an MFA from the University of the Arts. He is an Associate Professor of Art at Swarthmore College. Before Swarthmore he was a staff photojournalist at The Philadelphia Inquirer for 32 years where he shares a 2012 Pulitzer Prize. He was also nominated for three Pulitzers and honored with awards from World Press Photos and The Society of Professional Journalists among others. He is co-author of the book We Were There: Voices of African American Veterans, published by Harper Collins.

In 2001 he received a Pew Fellowship in the Arts. He has received funding and grants from Pennsylvania Council on the Arts and Independence foundation among others. His fine art work has been exhibited nationally and internationally and is included in many museum, corporate and private
collections including the National Museum of American Art, Philadelphia Museum of Art and The Studio Museum In Harlem.