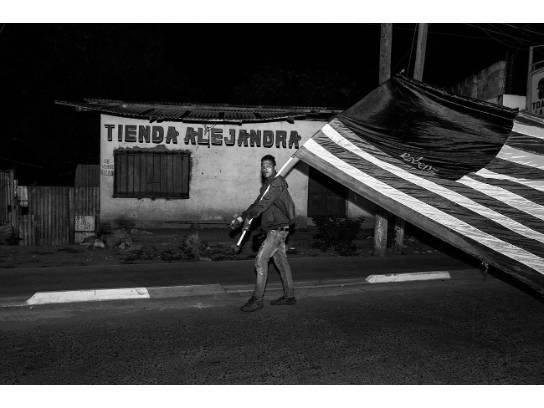 About the work
Over the last five years, I have documented the journeys of Central American refugees as they reach the Mexico/U.S. border. While the media often covers what is happening at the border, they frequently overlook the individual trials, struggles, and humanity of those seeking to escape violence in pursuit of a better life. Spending countless days and nights living alongside those I photograph, I hope to present an honest, unadulterated view of migrant life. It's critical to unveil individual journeys and explore why people have to leave their homes. If presented with the opportunity to exhibit at OyG, I would hope to create a space for engaging dialogue, where people can come to a better understanding of migrant life, and empathize with the stories being told. Although a great victory was achieved when Biden won the presidency, this country is still very divided and the significance of this topic remains crucial. Through the simple act of spreading awareness, I feel confident that we as a country and community can progress towards real change, where all human beings are treated as such, and white supremacy is eradicated.

Ada Trillo is a Philadelphia-based photographer, native to the Juarez-El Paso binational metroplex. In her work, she focuses on borders of inclusion and exclusion as they are experienced through people in sex trafficking, climate and violence-related international migration, and long-standing borders of race and class. Through the elements of documentary and fine art photography, Trillo lays bare our common humanity and dignity and brings attention to the impact borders have on exploited and marginalized people by amplifying their voices. Trillo's work is in the permanent collection of the Philadelphia Museum of Art. She is the recipient of the Female In Focus 2020 best series award, and was recently featured in The Guardian, Vogue, Smithsonian Magazine, and Mother Jones, among other publications. She has also been awarded The Me & Eve Grant with the Center of Photographic Arts in Santa Fe and received First Place in Editorial with the Tokyo International Foto Awards. Trillo has exhibited both nationally and internationally in New York City, Philadelphia, Luxembourg, England, Italy, and Germany. She holds degrees from the Istituto Marangoni in Milan and Drexel University in Philadelphia.