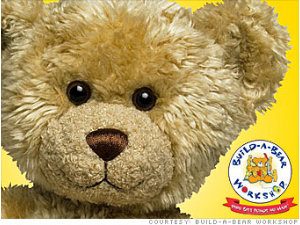 Take home these two furry friends today! What better gift to present to a child than these 2 brown Build-A-Bear friends! There is one light brown bear and one medium brown bear. Name them and make them your own! Birth certificates are included. The bears are not exchangeable or returnable. Donor: Build-A- Bear Workshop