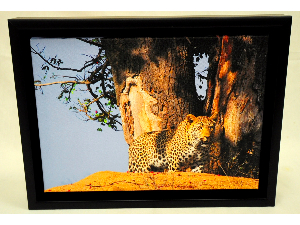 Feel like you're in the midst of Africa with this original photograph taken at the Singrita Reserve. A "2013" original by Tracy Burn Scurto Photography, this framed leopard photograph is sure to leave an impression. Donor: Tracy Scurto