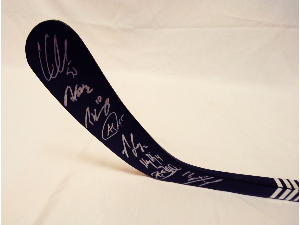 Imagine having your favorite hockey team autograph a memory for you? Well if you love hockey, then this priceless Chicago Blackhawks hockey stick is for you. Signed by the team along with a certificate of authenticity, this is one memorable gift! The luckey winner will also receive 4 tickets to a 2014-15 game and post game locker room tour. Game date to be mutually agreed upon with the donor. Donor: Chicago Blackhawks