You receive 10 tickets to Art on Fire on Friday, September 13 and the preview party and demonstration with honorary artist Shelley Muzylowski Allen on Wednesday, September 11.

You receive 8 tickets to Art on Fire on Friday, September 13 and the preview party and demonstration with honorary artist Shelley Muzylowski Allen on Wednesday, September 11.

You receive 6 tickets to Art on Fire on Friday, September 13 and the preview party and demonstration with honorary artist Shelley Muzylowski Allen on Wednesday, September 11.

Support An Artist Hidden Sold Out Only 74 available

You receive 2 tickets to Art on Fire on Friday, September 13 and the preview party and demonstration with honorary artist Shelley Muzylowski Allen on Wednesday, September 11.

In addition, 2 tickets will be given to local artists to attend both events.

Admission for one to Art on Fire, Pittsburgh Glass Center's annual glass art auction and celebration.

THANK YOU FOR SUPPORTING PGC
AT OUR BIGGEST ART ON FIRE YET! 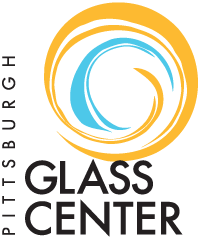 Art on Fire is our most important fundraiser. It attracts nearly 500 community leaders and art appreciators and generates over 10% of our annual operating funds in ONE evening! Proceeds directly support free public programming and accessibility initiatives at PGC, which include free monthly open houses and demonstrations, three exhibitions a year in our public-access gallery, and scholarships for veterans and students of color.

We hope that you attend the event and bid in person. The live auction begins at 8pm. If you cannot attend Art on Fire, bids on live auction items will be accepted by telephone at 412-365-2145. 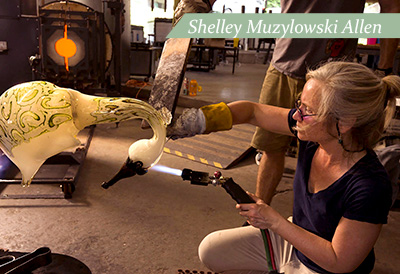 Shelley Muzylowski Allen was born in Manitoba, Canada, and has a B.F.A. in Painting and Intaglio from the Emily Carr Institute of Art & Design (Vancouver, B.C.). In 1998, Shelley worked with the William Morris sculpture team in Washington State as a glass-sculpting assistant through 2004.

In 2005, Shelley established a glass and sculpture studio with her husband, artist Rik Allen at their property in Skagit County, Washington. In addition to being an artists, Shelley and Rik and have taught internationally at the Toyama Institute of Glass in Japan, Nuutajarvii Lasikyla, Finland and the International Glass Festival in Stourbridge, England. They have also taught nationally, including the Penland School of Craft, Pittsburgh Glass Center, and at Pilchuck.

Shelley has been awarded Provincial and Canada Council grants, and her work is held nationally and internationally in public institutions and private collections. In 2008, Shelley had a solo exhibition at the Museum of Northwest Art in La Conner, Washington, titled Modern Menagerie. Other selected shows include The San Juan Museum of Art, Blue Rain Gallery, Santa Fe and Scottsdale; Habatat Galleries, Michigan; Traver Gallery, Seattle; and Schantz Galleries, Massachusetts. In 2012, Shelley was a guest artist at Studio Salvadore in Murano, Italy, where she collaborated with Davide Salvadore on a series of large-scale sculptures.