Single seat at one of the event's tables. Each seat is tax deductible up to $175.00

0 left
Hidden
Only 0 available
Sold Out
Sold Out

Back Inside Cover Journal Advertisement

Friend Listing in Our Journal

Help Life's WORC by contributing to our fundraising efforts.

Help us reach our goal of 1,000,000! No act of generosity is too small to make a difference.
All donations are 100% Tax-deductible.

Thank You to Our Generous Sponsors

William E. Brown ("Bill") is the Chief Retail Officer of Investors Bank. He is responsible for the sales, service and operations of nearly 150 full-service Retail Branches in New Jersey and New York as well as Business Banking, Wealth Management, and the Small Business and Consumer Lending teams of the bank. Bill brings many years of consumer and business banking experience to Investors having previously worked at Citibank and HSBC. He has proven success in leading and managing large-scale retail banking networks, both nationally and locally in the New York Metro Market. His primary responsibility is to execute Investors Bank's growth strategy for its Retail Division and support the bank's transformation into one of the region's preeminent commercial banks.

Investors Bank has deep roots and a strong commitment to the "community" part of Community Banking. Bill works closely with not-for-profits, civic organizations, government agencies, and his Investors colleagues to ensure that the bank is giving back. Communities should be better because Investors Bank is present and thus leading Investors volunteer initiatives, sponsorships, and Foundation grant giving activities. This affords Bill an opportunity to continue playing a role in building upon the bank's rich legacy of corporate altruism. Bill is a very active volunteer in a number of community initiatives and also serves as a member on the Retail Banking Committee of the New York Banking Association.

He attended Boston University and earned a Bachelor of Arts degree in International Relations. He served nearly eight years in the United States Navy as a Naval Flight Officer and was later assigned to the Pentagon. Mr. Brown resides with his wife and two children on Staten Island. 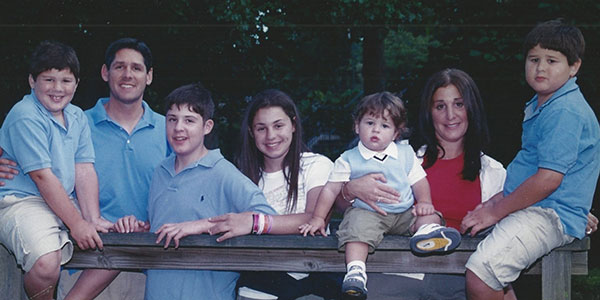 Stacy & Jon Zauderer are the parents of five children including Mathew, who is 27 and has severe autism.

They first met Life's WORC in Dec 2015 when Mathew was in crisis and living in a group home under the supervision of a different agency.

Desperate for help, they turned to the Family Center for Autism. As Mathew's crisis unfolded, the FCA worked tirelessly to provide a safe haven for Mathew and to restore some structure & routine to his days.

This dedication and desire to help Mathew formed the foundation of a very deep bond between the Zauderers and Life's WORC.

On Nov. 21st 2016 in an act of true heroism Life's WORC was able to place Mathew in one of their group homes. This began " phase two " of the process of saving Mathew as he had regressed tremendously in his former placement and needed a great deal of rehabilitation .

Today, Mathew is thriving and the Zauderer family, including their children Alyssa, Alex, Justin & Ethan remain overwhelmed with gratitude.

Stacy is a homemaker, past PTA President and member of the Life's WORC Family Resource Committee. She has served for over ten years on the Roslyn School District Committee for Special Education as well as their 504 Committee. She spends her free time obsessing about how to help people with autism & disabilities.

Jon is a Global Tech Specialist for Exane BNP Paribas, and has over 30 years of Wall Street experience. He serves on the Anderson Center for Autism PR committee and is a former board member of the American Friends of Alut - the Israeli Association for adults & children with Autism.

They live in Roslyn and in addition to their 5 children they have two energetic dogs and a bearded dragon. They have been unable to get a decent family photo since 2005.

After serving on the Life's WORC Board of Directors for over 30 years, Rick Del Mastro stepped down in June, 2019. For many of his years as a Board Member, Rick served as Chairman, helping to grow the agency from 12 homes to over 40 homes and expanding non-residential programs. In April, 2015 Life's WORC opened the Family Center for Autism (FCA), a state of the art 10,000 square foot building serving individuals on the spectrum as well as offering programs for their family members. The opening of the FCA was made possible with a $1 million donation by Rick Del Mastro. The FCA was officially dedicated to Rick and his Family in 2016. It is now The Del Mastro Pavilion - named in honor of Rick and his family.

Rick's current roles and responsibilities vary. He is the owner of several principal companies in the out-of-home industry - OOH Impact, Inc., and City USA, the Media Group comprised of City Outdoor, City Streets and City Eventions. His transition to the outdoor industry resulted from his tenure as President and CEO of Gannett Outdoor New York (currently Outfront Media), which during Rick's tenure was the largest outdoor company in North America. Rick also currently sits on the board of directors of the Outdoor Advertising Association of America (OAAA) and was inducted into OAAA's prestigious Hall of Fame this spring in recognition of his innovations and years of service to the outdoor industry.

We look forward to seeing you on November 7, 2019 for the Life's WORC 49th Anniversary Gala at the elegant Garden City Hotel. There will be music, videos, auction items, raffles and much more. All proceeds from the Gala will benefit the individuals in Life's WORC homes and programs. If you have any questions about the event, please call 516-741-9000, ext. 5000.

Life's WORC is a private not-for-profit agency that provides a comprehensive support to people with special needs including intellectual challenges, developmental disabilities and autism. We maintain 42 homes and 12 non-residential programs throughout Long Island, Queens and Manhattan. In addition to being known for providing excellent programs and services to a special needs population, Life's WORC is also known for its efficiency. In fact, as documented in our most recent audited financial report, 91 percent of the funds received by Life's WORC is spent directly on the people we support.

Life's WORC Board of Directors

CHAIRMAN OF THE
BOARD EMERITUS
Rick Del Mastro

I would like to purchase a ticket and automatically be registered to support Life's WORC!

I am not purchasing tickets, but would like to register to support Life's WORC!