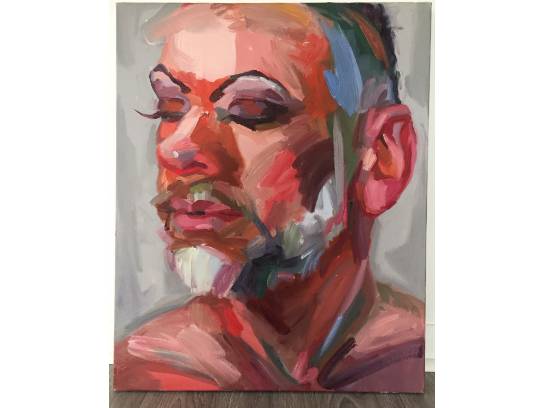 Jo Hay is a contemporary British American portrait painter. Born in 1964 in Newcastle Upon-Tyne, England, she received her BA from Middlesex University, London, UK in 1983 and her MFA from the New York Academy of Art, NY, NY, 2012.

Hay was the first recipient of the Lillian Orlowsky and William Freed Foundation Grant 2010 sponsored in part by the Provincetown Art Association and Museum and the recipient of the New York Academy of Art Portrait Scholarship 2011. Her portrait from the Benders series entitled Dodger was a semi-finalist in the BP Portrait Award 2015 at the National Gallery in London and was a finalist in Art For Freedom A Global Initiative curated by Madonna.

Hay was also the main subject of a documentary She is Juiced by British director Lois Norman. It was screened at Tate Modern in 2017 as part of the ground-breaking Queer Britain exhibition and the London Pride launch 2017. The film has received outstanding reviews and won the best documentary at both the New Renaissance Film Festival in Amsterdam and Brighton Rocks film festival in Brighton, UK.

She Is listed in The Top 100 Figurative Painters Working Right Now, 2018 by Didi Menendez, BuzzFeed.

Founded in 2013, CAROLYN KRAMER GALLERY is a contemporary art gallery located in Provincetown, MA. Carolyn Kramer, Founder and Gallery Director, has a clear vision and bold approach to the art scene in Provincetown. The gallery's mission is to exhibit current, provocative art that motivates conversation and progressive thought. Exhibitions are propelled by the art and it's message creating an open and inclusive space to delve into contemporary issues.