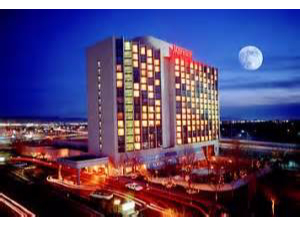 Enjoy a complimentary weekend night stay (Thursday through Sunday) at the Albuquerque Marriott. our recent multimillion-dollar makeover has revealed a gorgeous new lobby, lounge, restaurant and business center, as well as stunning guest rooms. Discover our Albuquerque hotel in the thriving center of our city's dining and shopping district, affording gorgeous views of the Sandia Mountains from your room. At one of the best-located Albuquerque hotels, you'll explore entertainment, shopping and easy access to the Albuquerque Sunport, Historic Old Town and the Sandia Peak Tram.