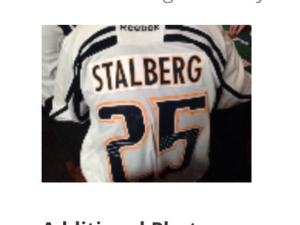 GnashVegas jersey off their back autographed by Viktor Stalberg