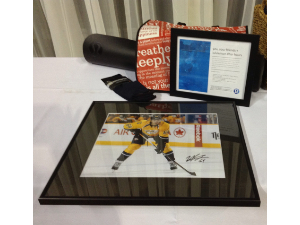 This basket includes: framed action print autographed by Victor Bartley, the (big) mat yoga mat from lululemon, men's ultimate no show run sock from lululemon, you, your friends & lululemon after hours - Join the lemons at lululemon athletica Hill Center for a night of private shopping after hours for you and your friends. We'll start with 30 minutes of yoga with an ambassador, followed by an hour of shopping, drinks and snacks, all with the store to yourself!