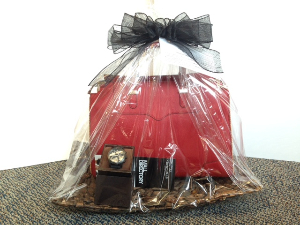 This package includes: Rebecca Minkoff handbag from Saks Fifth Avenue OFF 5TH, Michael Kors watch, $150 Opry Mills Giftcard, transportation for you and 9 friends to Opry Mills in a luxury shuttle, lunch for all at Aquarium Restaurant and gift bags & personal greeting upon arrival.