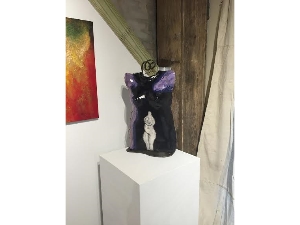 A original hand built front torso of a woman, 24" x 14", entitled"Matisse in the Womb" by Marla Donovan from Estudio M, base made by New Orleans metal sculptor Luis Colmenares.