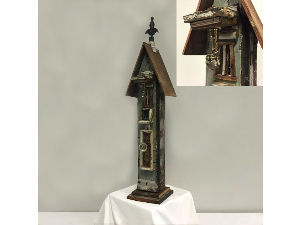 Hand-crafted Mr. Willi birdhouse mansion with antique New Orleans hardware featuring 1930's glass doorknob for perch and a glass globe from the leg of a 1920's piano stool for decor