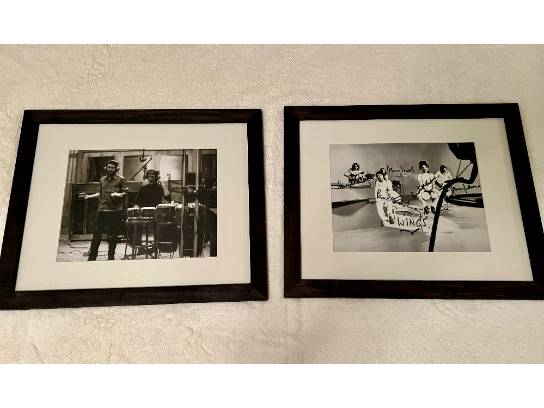 Drummer Denny Seiwell had played with Zoot Sims and J.J. Johnson before joining Paul McCartney and Wings. His work on 1971's Ram, in fact, arrived even as he played dates with Billy Joel and James Brown, among others.

Elsewhere, Seiwell worked with Art Garfunkel, Rick Danko of the Band, Joe Cocker, Janis Joplin and the Who. Still, it's his time with McCartney, which included a stint through 1973 in the first lineup of Wings, that remains his signature moment in rock.

The first photo is from the RAM album recording in New York City at CBS studios 52nd St. It is a photo taken by a Linda McCartney of Paul and Denny doing percussion overdubs.

The second framed photo is a picture of Wings on a TV show in Britain. This was originally made up as a postcard for fans and Paul had all the members sign it. It's a nice piece of memorabilia with a copy of the signatures of the original Wings band.