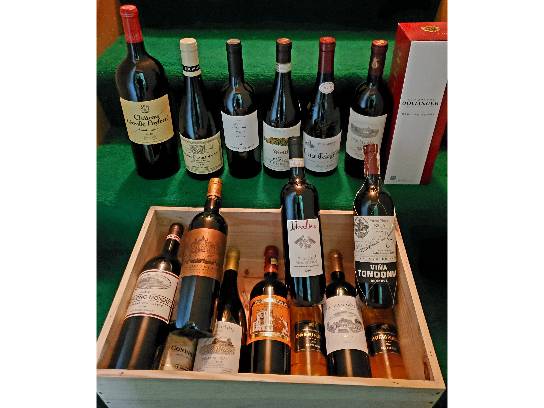 Start your wine cellar with a fabulous collection of 24 superb bottles of fine wine from France, Italy and Spain, chosen by our experienced local sommelier team. All of the wines have been carefully selected are rated 95 points or higher by nationally recognized wine reviewers including Wine Advocate, Wine Enthusiast, and Wine Spectator.

The winner will receive descriptive notes for each wine. Wines were personally selected by Robert Barr Wine Advisors (a Level One Sommelier) and the wine committee at Binny's Liquor Store.

Bob " AKA" Roberto , has been collecting, researching and consulting on wine for friends and family for over 50 years Reviewed collections over $5 million. Bob is the Former Chairman of the wine Committee at Hinsdale Golf Club and the University Club of Chicago. Bob was a guest wine speaker on the NBC Today Show.

10 Extremely Rare and Impossible to Find Cigars Anywhere in the World!

Aged over 10 years . Like fine wine, they improve significantly with age. All cigars in impeccable condition. The current vintage of Fuente OpusX retails for $145, but you will receive the 2006 and 2007 vintage! That is over 16 years ago! Fuente is one of the most respected and well known cigar manufacturers worldwide.

And the Cohiba Behike 56, is one of the most coveted of all Cuban cigars. Considered the Bently of Cuban cigars holding an almost mythical reputation among connoisseurs for its quality.

These cigars were a gift of Mrs. Kathryn Adams Limbaug (from Rush Limbaugh's personal collection). Donated to Roberto Barr earlier this year with Operation Deployed. A small number where set aside for friends and family that support admirable causes like Circle Urban Ministries.