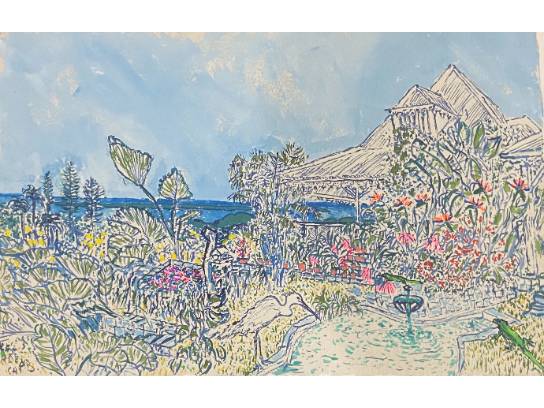 Odile's Garden by Christian Peltenburg-Brechneff gouache, 13.5 x 21 inches, 17.5 x 25 inches framed, 2016. Born in the former Belgian Congo, Christian Brechneff was educated in Switzerland, England, and the United States. He received his Masters of Art degree from the Royal College of Art in London. He has won numerous awards, while his work appears in many public and private collections, including the Metropolitan Museum of Art and the National Gallery of Greece. In 2017, he was the subject of the award-winning documentary film, Like Notes of Music: Christian Peltenburg-Brechneff - The Landscape Painter, a Magee production from Switzerland, which was inspired by his memoir The Greek House.

Donated By the Artist