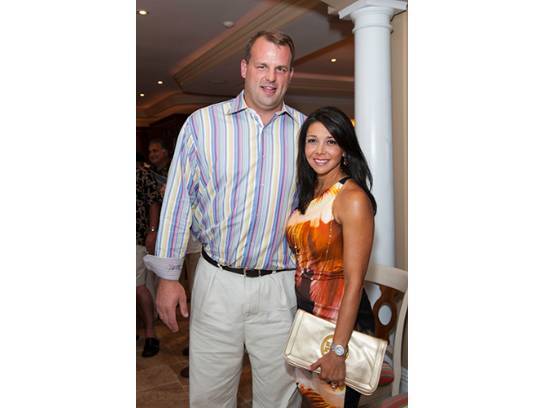 Six volunteers will join Jon and Loretta Runyan to participate in our Served with Love program, to prep and serve meals for over 200 individuals who are staying with us while their children receive life-saving care.

Volunteer date would be on a mutually agreed upon date between RMHC Philly, Jon and Loretta Runyan, and the winner.

Jon Runyan is an American athlete (former Philadelphia Eagle) and politician who was the U.S. Representative for New Jersey's 3rd congressional district from 2011 to 2015. Before entering politics, he was an American football offensive tackle in the National Football League, where he played for 14 seasons. Jon holds 5th on the list of most consecutive starts in the NFL. He started in 193 games during his NFL career and 144 of these starts are with the Philadelphia Eagles. He was also a participant in the 2003 Pro Bowl following the 2002 NFL season.

Jon was drafted by the Houston Oilers in the fourth round of the 1996 NFL Draft and later played for the Philadelphia Eagles and San Diego Chargers. Runyan was the last active NFL player to have played for the Oilers. He played college football at Michigan where he was a 1995 All-Big Ten Conference selection. In high school, he had been an All-State (Michigan) selection in basketball and two-time state champion shot putter. He retired at the end of the 2009 NFL season and launched his campaign for Congress against incumbent freshman Democrat John Adler, winning the general election on November 2, 2010.

Beginning in 2016, Runyan became the Vice President of the Policy and Rules Administration for the NFL.
Loretta Runyan Biography:

Loretta Runyan is the wife of former NFL player Jon Runyan. She has 3 children, Jon Runyan Jr., Bella, and Alyssa.

Loretta served as a police officer in Houston, TX for 11 years and shined at the White House as a Congressional wife while Jon served 2 years as a member of Congress.

Donated By Jon and Loretta Runyan