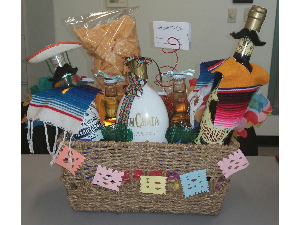 ˇOle! Do you want to go south of the border? This Libation Basket is perfect for your Cinco de Mayo celebration ... or just plain Wednesday! Whip up some margaritas with Cuervo Silver or Rumba with some Rum Chata. Of course you'll want chips and salsa with that. Ay caramba! Donated By: The Teevan Family Value: $125