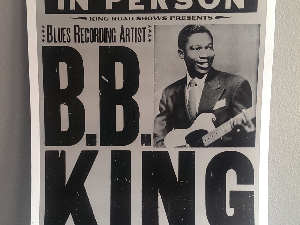 All hail the King of the Blues! This striking B. B. King poster seems to date from the 1950s, when Riley "Blues Boy" King was cutting classics like "Whole Lotta Love" and "Every Day I Have the Blues." This one-of-a-kind 14" x 22" window card, sold during King's tour, can be yours for a song. Donated By: Hatch Show Print Value: $100