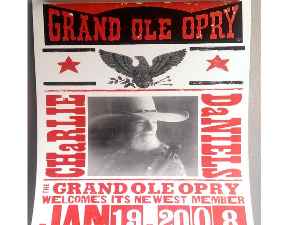 Charlie Daniels - Grand Ole Opry Hatch Show Print. Yours to commemorate a fiddling man who became a leading force in both Southern rock and country music. The ultimate rite of passage came in January 2008, when Charlie finally joined the Opry cast at age 71. Donated By: Hatch Show Print Value $100