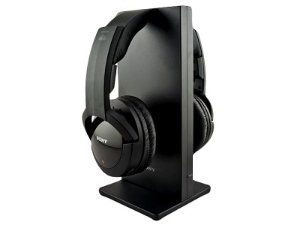 Sony Wireless Stereo Headphone System. Untangle your mind and relax with crisp, personal audio without wires. They also feature a comfortable headband and long battery life up to 25 hours. Best of all, one simple setup is all it takes to achieve optimal RF signal reception and you're on your way to cordless freedom. Donated By: Joanne Pier Value: $100