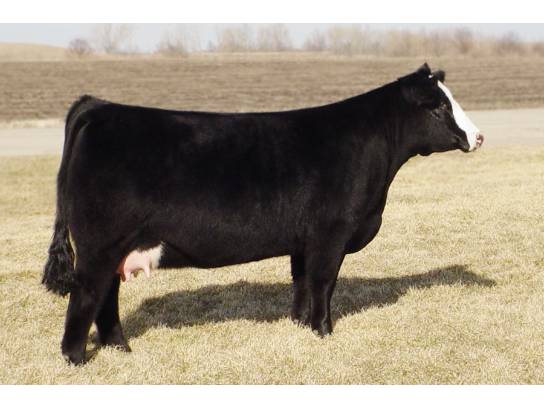 Apple Blossom 245X has turned out to be quite a performer and this is a fantastic combination with the powerful, purebred sire, Profit! Apple Blossom 245X was everyone's choice as the Grand Champion Female of the 2011 North American International SimSolution Show, the Grand Champion Percentage Female of the 2012 National Western Junior Simmental Show, and the Reserve Supreme Female of the 2011 World Beef Expo. She is a blaze-faced stunner that has been remarkable in production.
- Her first calf - a blaze-faced heifer by I-80 - sold for $8,500 even though she spent most of the summer with her mother in transplant, and her daughter by Irish Whiskey brought $9,000 and now works for Doug Stork, MI. The 2014 crop from 245X contained two outstanding bulls by CARD Uproar that were favorites of the 2015 Program Bull Sale where they averaged $7,300.
- Apple Blossom is hard to fault with her impeccable good looks, exceptional udder quality, and significant productivity in such a short time. She has a sweet crop on the ground again now, and she should be a perfect complement for the $400,000 Profit whose purebred daughters averaged $61,250 and whose sons were very popular in Denver 2017.