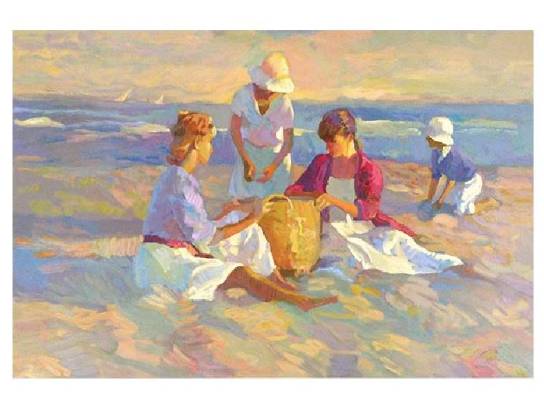 Don Hatfield was born on May 16, 1947 in Long Beach, California. There, he studied philosophy, theology, and literature and it was not until he met the well known portraitist, Charles Cross, that he began to explore his talents as a painter. Impressed with the "innate color sense" Hatfield displayed in the soft pastel colors of his oil paintings, Cross encouraged Don to become his protégée.

Two years of study with Cross was not enough to convince Don to focus all of his energy on art. He abandoned his short career in art to pursue a career in ministry. However, in 1979, on the advice of the premier portrait painter Ray Kinstler, Hatfield moved to Santa Fe, New Mexico, to pursue painting once again.

Hatfield eventually moved back to Los Angeles to fulfill his creative potential under the master tutelage of Sergei Bongart, who had a tremendous influence on him. "He was a wonderful presence and a great teacher," says Don. It was during this time with Bongart that he diligently worked and perfected the style that we recognize today.

Don Hatfield is inspired by the works of Edward Henry Potthast, William Glackens, Maurice Prendergast, Joaquin Sorolla, and John Singer Sargent. In his development as an artist, Hatfield has the added influence of modern cinematic interpretation. Affected by the new mastery of color in film, advertising and television, he felt a need for a more intoxicating light, another dimension to the beach attraction. Seeking truth in paint itself, he documented that fleeting essence of the tender, the humorous, the enchantment of a special moment in time.

Buyer to pick up at Arkansas Children's Foundation in Little Rock or Springdale during pickup hours, or pay shipping.

Donated By Friends of Arkansas Children's