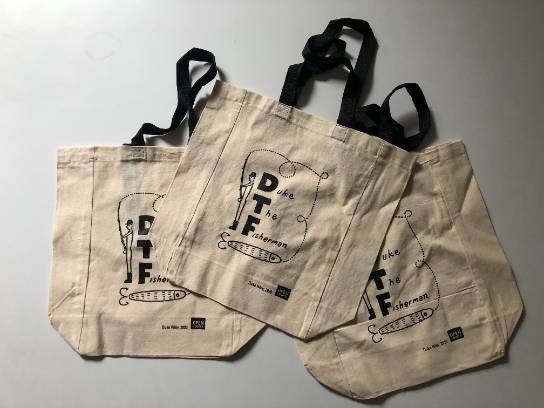 Carry your groceries in style with this tote bag featuring the Duke the Fisherman design from Duke Riley's 2020 exhibit at Open Source, Welcome Back to Wasteland Fishing!

In Welcome Back to Wasteland Fishing, Riley gleaned discarded single use and household plastic items from two New York City beaches (Gerritsen and Plumb Beach) and fashioned the trash into DIY fishing lures he then used to catch fish. Riley presented his experimentation and field research in the genre of popular YouTube fishing tutorial. Within these actualizations of hyper masculine tropes and bucolic imaginings amateur videographers often interweave subtle product endorsements and have gained mass appeal for their calming slow pace.

Primal instincts are the core implement of consumer entrapment: as our own desires to reconnect with the dwindling natural world are coupled with convenience, we chase our own lures towards another turning point in human civilization. Accompanying the video will be a display of over a hundred lures made from reclaimed beach plastic, arranged on a table like specimens.

Duke Riley received his BFA from Rhode Island School of Design and his MFA from Pratt Institute. Riley has had solo exhibitions at Magnan Metz Gallery, the Museum of Contemporary Art Cleveland, the Queens Museum of Art, and the Havana Biennial (2009 and 2015), among other venues. He has received numerous awards and commissions, including a Joan Mitchell Foundation Painters & Sculptors Grant, the U.S. State Department's SmARTpower Program in China, and the MTA Arts For Transit commission for the Beach 98th Street Station renovation. In 2016, Riley partnered with Creative Time and the Brooklyn Navy Yard to produce the public art sensation, Fly By Night, which was again produced in 2018 by 1418 Now and the London International Festival of Theater.