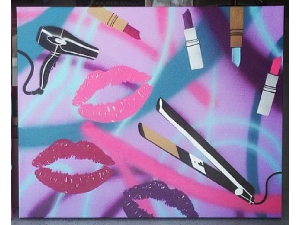 This Canvas Painting is a result of having grown up in a family invested in the beauty business. Influenced by graffiti and street art on the West Coast, this painting is a culmination of Jason's artistic practices and exposure to the beauty industry. Generously Donated by: Peninsula Beauty and Jason Hess Studios Fair Market Value: $1,500