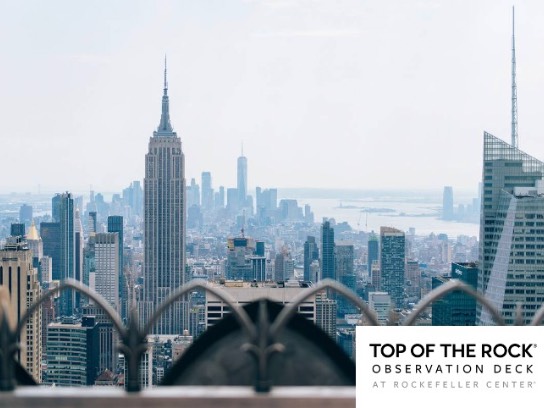 2 Tickets to Top of the Rock Observation Deck at Rockefeller Center in NYC!

Ready for the most complete and beautiful view of New York City? With a 360-degree view of the city and three indoor and outdoor viewing decks, Top of the Rock offers the New York skyline as you've never seen it before.

Rise to the 70th floor of 30 Rockefeller Plaza and step out into something breathtaking-miles of cityscape, the lush greenery of Central Park, stunning views of the Empire State Building, and so much more. Gaze down onto the art deco architecture of Rockefeller Center or out into the city that never sleeps.

And with viewing times ranging from 10am-10pm, you'll be able to see all the city's faces-awake, architectural and pulsing with the energy of culture and excitement.

Donated By Top of the Rock Observation Deck at Rockefeller Center