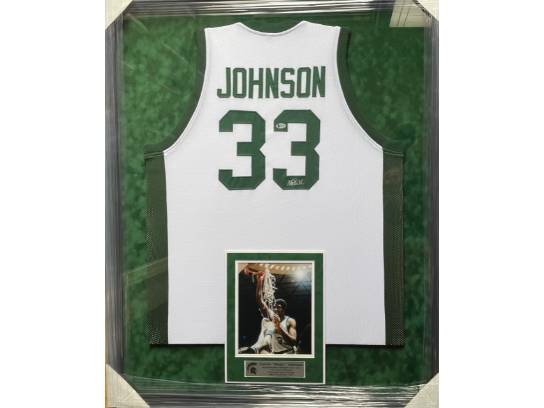 Here is an autographed in Framed Michigan State jersey signed by the greatest in their history Earvin Magic Johnson.

The jersey has been signed in silver and framed with a beautiful green suede backing.

The autograph has been authenticated by Beckett Authentics. Framed, this jersey measures 35 x 44". The retail cost of just the framing is $650. Magic Johnson played the basketball Hall of Fame in 2002 he was the league MVP three different times 1987, 1989, 1990 and lead the Lakers to five world championships. He has been rated as the fourth greatest basketball player of all time. As a guard he could play all five positions in the game have a crew average of 19.5 points per game 11.2 assists.