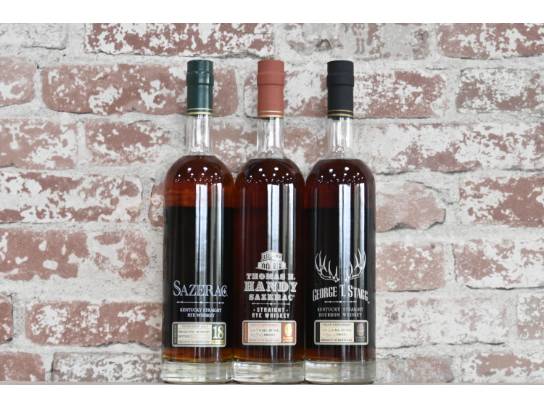 SAZERAC RYE 18 YEAR-OLD
The famed Sazerac Coffee House was founded in 1850 on Exchange Alley in New Orleans, Louisiana and soon gained fame as the home of "America's First Cocktail" known as the Sazerac. Using rye whiskey in place of the French brandy, a dash of Peychaud Bitters, and Herbsaint, what eventually became the official cocktail of New Orleans was created. This straight rye has a mellow spice and dry sweetness that dances on the tongue, giving pure delight that is worthy of the Sazerac name.

Named after the New Orleans bartender who first used rye whiskey in the Sazerac Cocktail, this uncut and unfiltered Straight Rye Whiskey is bottled directly from the barrel, just as it was over a century ago. Full of rich flavors, this authentic American rye whiskey is a symbol of the timeless history of New Orleans and the legacy of Thomas H. Handy.

This extremely hearty whiskey ages in new charred oak barrels for no less than 15 years. Straight out of the barrel, uncut and unfiltered, the taste is powerful, flavorful and intense. Open it up with a few drops of water, sit back and ponder the wonders of the universe.

*The Reserve price of $2,500 must be met or the item will be removed from the auction.