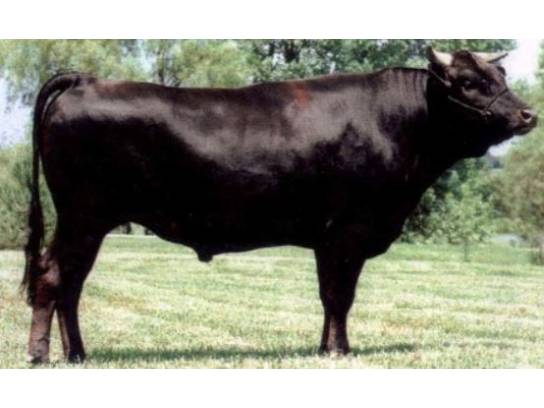 (FB1615 / WKSFM0164) - Michifuku is thought by many to be the best overall carcass bull ever to leave Japan. Even with smaller framed offspring, his progeny's carcass characteristics are superb. Michifuku was formerly the number one marbling bull in the U.S. Wagyu Sire Summary, and consistently ranks second in ribeye area (REA) and fourth in back fat thickness (EPD). Michifuku's sire, Monjiro 11550, is linebred to Tajima J105, great-grandsire of Yasumi Doi J10328. Michifuku's dam, Michiko J655635, was sired by Tanishige 1526 and grandsired by Yasutanidoi J472. Yasumi Doi J10328 and Yasutanidoi J472 are considered to be two of the most famous of the Tajima/Tajiri line. Yasumi Doi J10328 sired Yasutanidoi J472, as well as Dai 2 Yasutsuru 774, sire of Fukutsuru 068. Yasumi Doi J10328 also grandsired Yasufuku 930, sire of Yasufuku Jr. and grandsire of Takazakura. Yasumi Doi J10328 appears twice in Michifuku's pedigree. Descendants of his sire Monjiro 11550 produced carcasses that sold at auction for $16,000, $18,000 and $21,000 at the 2007 All-Japan Wagyu Competition. In progeny tests conducted by his owner, World K's Group, in Australia, 12,000 F1 calves were fed 540 days, achieving 2.31 lbs. ADG, with 85% grading 9+ on the Australian scale, with the remaining 15 percent all grading 7-9.