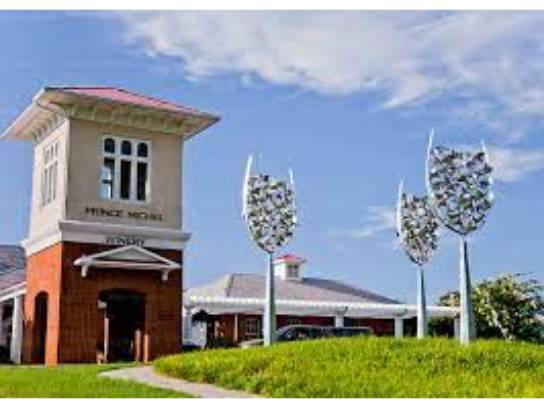 Located in the heart of Virginia Wine Country and stunningly situated along the rolling foothills of the Blue Ridge Mountains, Prince Michel Vineyard and winery is home to Prince Michel and Rapidan River Wines. This family- and pet-friendly establishment is also one of the east coast's premier wine estates. Prince Michel is among the oldest and largest wineries in the Commonwealth and is now the home of Tap 29 Brew Pub, serving up some of the finest local craft brews and pub style food 7 days a week. You and up to 7 guests will enjoy a VIP Tour and Tasting where you'll receive a private tour of the production facility before indulging in your choice of a standing or sitting tasting with a customized tasting menu.

When Prince Michel Vineyard and Winery was founded in 1982 by Parisians Jean and Sylvian LeDucq, a vision was formed out of the love of Virginia and its relationship to the vine. Prince Michel has grown to become one of the largest, most widely distributed and recognized wineries in the state as well as along the east coast. Our wines have won competitions around the world and flourished with the efforts of our founders, the LeDucq's, owner Kristin Easter, employees, and loyal customers.

Although Prince Michel has "Old World" beginnings with original French ownership, there is nothing conventional about the winery or its wines. The Prince Michel story is one of perseverance and innovation in a sometimes too stodgy environment. Prince Michel's basic approach is that "wines should be enjoyed and the best wine is what you like." Much of this fresh approach to wine comes from the present owner of Prince Michel, Kristin Easter. Only one of a hand-full of female winery owners, Kristin's business model is centered around hospitality and the pleasure of a great wine experience. Her creative business style has challenged the traditional philosophy of how to experience wine.

The diversity of wines produced by Prince Michel and Rapidan River allows a level of choice most wineries cannot achieve on such a large scale. Wines range from high-end "craft" wines like Viognier, Syrah, and Symbius grown from select Virginia vineyards to more unique wines from the Rapidan River series like the Semi-dry Riesling, Peach, and Chocolate.