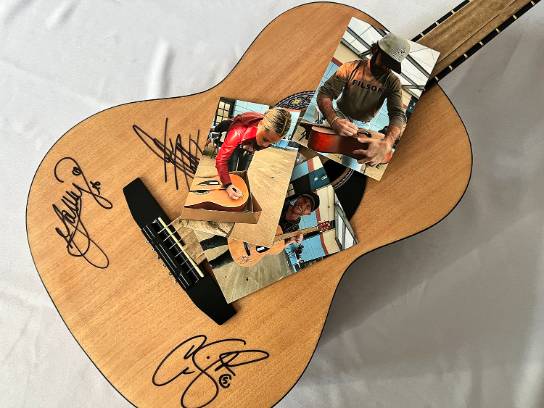 A must-have if you're a fan of country music, this autographed Thomas Rhett guitar is truly one-of-a-kind! Thomas signed the guitar at his September 23, 2021 concert at Cincinnati's Riverbend Music Center, along with his opening acts Cole Swindell and Gabby Barrett.

The son of singer Rhett Akins, Thomas Rhett has released five studio albums and received four Grammy Award nominations, with two albums being nominated for Best Country Album in 2017 and 2019.

His five albums have produced twenty-one singles on the Billboard Hot Country and Country Airplay charts, with sixteen reaching the No. 1 position on the latter.

In addition to much of his own material, Rhett has written singles for Jason Aldean, Lee Brice, Florida Georgia Line, LoCash, and Michael Ray, among others.