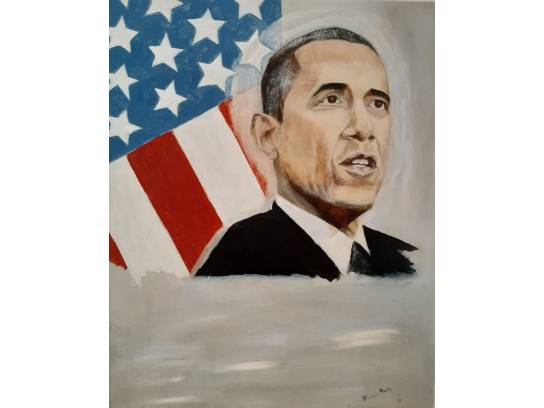 The first Black President of the United States of America.

This is a picture of the president giving his inaugural address as he became the 44th president of the United States of America. The picture shows how he rose above the clouds of adversity to stand tall, with a saint like quality, thus the halo around his head looking up to guide his country to a brighter future.

Bio: Patricia is a mother of four children, a designer, a historian, a teacher, an artist, and an author. Patricia earned a B.S. degree in Interior Design and a Masters in Housing and environmental Design from Michigan State University and there became a member of the Alpha Kappa Alpha Sorority. She is a retired professor from St. Clair College after 25 year of service. At St. Clair she developed the curriculum for the Interior Design Program. The program was recognized by the designs societies and leading design schools in the U.S. and Canada. She was the first Black woman to develop a major program at the College.

Patricia is the Author of the book The Houses of Buxton, A Legacy of African Influences in Architecture. Patricia creates original textile pattern designs based on African Influences for home furnishing manufactures. She has displayed her art work with The Artist of Colour.

Donated By Donated by Patricia Neely-McCurdy