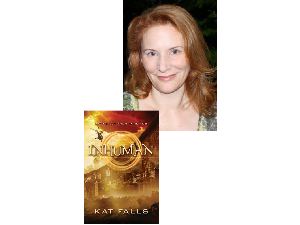 Name a character in author Kat Falls' next book! Winner may designate a name of their choice to be included in the forthcoming Book 2 of the Fetch series. This package includes a signed copy of the first book in the series, Inhuman, with a page marker showing where the 2011 winning name was included!