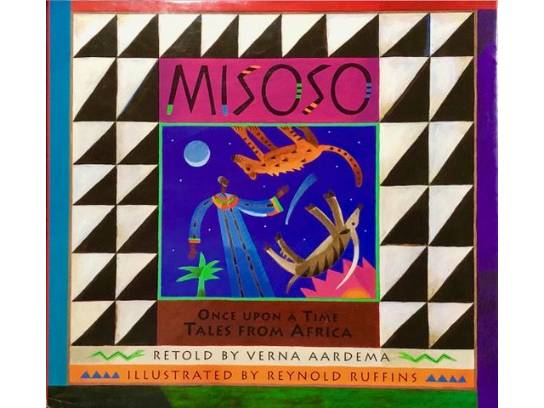 Complete your collection with a First Edition Misoso: Once Upon a Tales from Africa by Verna Aardema and signed and illustrated by Reynold Ruffins.

Master storyteller Verna Aardema retells 12 tales of justice and revenge, greed and generosity, sly trickery, and off-the-wall silliness with her trademark humor and flair. Nearly 50 illustrations vibrantly reflect the spirit of these read-aloud delights, while a map of Africa, story source information, makes this a rich volume for folk-tale lovers of all ages.

About Reynold Ruffins: Reynold Ruffins' present paintings and drawings are preceded by a career as an illustrator and designer. He is a graduate of The Cooper Union and a recipient of its most prestigious honor, The Augustus St. Gaudens Award for outstanding professional achievement in arts. The Cooper Union Presidential Citation was also presented to Ruffins for his work and prominence in his profession.

His work has been acclaimed in trade and design publications, among them: 200 Years of American Illustration, A History of Graphic Design, The Push Pin Graphic, African American Art, Graphis and How Magazine. In addition, he has been internationally recognized in group show exhibitions at The Louvre in Paris, Milan, Bologna, and Tokyo.