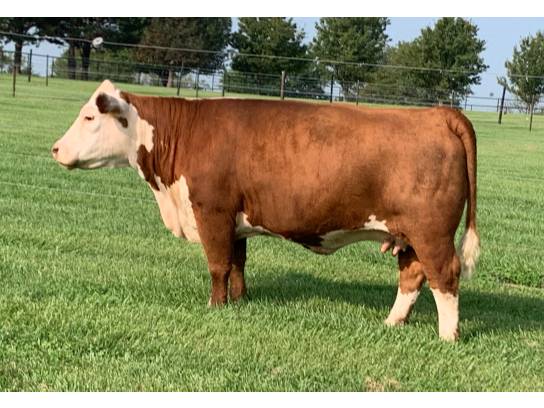 Heifer Calf Born 10/15/20, If you are new to the Mini Hereford breed, listen to these stats - Lot 4, KLD Echo is a full sib to KLD Kit(two time National Champ) KLD Estelle(Grand Heifer in KC, Louisville and Denver) and KLD Cally (Grand Heifer and JR Nationals and Louisville). Those 3 full sisters have also produced at least one National Champion themselves! INCREDIBLE! That's the blood running thru this elegant lady! She did well raising her first calf, KLD Beast Mode was Reserve Grand Prospect Steer and JR Nationals this year. There is a difference and the Orson x Cady matings just flat get it done. Sells with a super Heifer calf at side by BR Tyrion, the Triple Crown Winning ,Unbeaten, King of the Ring! KLD Echo is only 3 years old and ready to produce more champions for the next decade! 44 inches tall