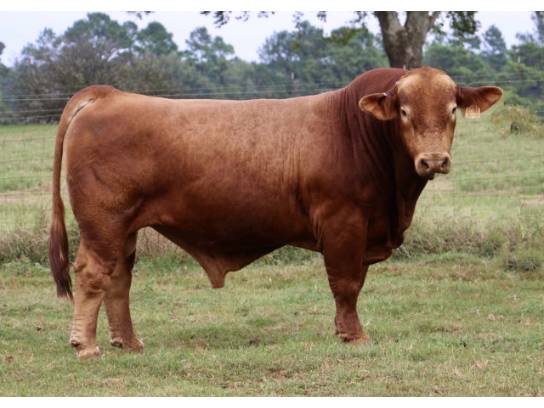 The American Junior Simmental Association played a key role in our development as young people and as the years went by our friendship was strengthened by the time we spent at Simmental/Simbrah events both here in Texas, as well as at Junior Nationals. To show our gratitude we have decided to donate the proceeds from the very first LMC SSC Angelo semen to the American Simmental/Simbrah Foundation.

The Angelo bull always had an eye appealing look about him. We decided to forgo a show career on him to collect some useful data in the Rio Grande Valley Beef Improvement Association's Performance Gain Test, where Angelo boasted a 4.11 %IMF, a 3.79 ADG and an overall test ratio of 106 putting him among the best of the test. He is in the Top 3% for Weaning and Yearling Weight, as well as the Top 15% for Maternal Weaning Weight, Average Daily Gain and TI.

Angelo's pedigree is among our very best, he is sired by the National Percentage Champion Simbrah Bull, LN LMC 12th Man and out of our productive, many times champion LMC Daydream donor. A full sister sold for $25,000 to the Culpepper Family in the Black Label and she went on to be ASA National Champion Simbrah Female in 2018. Another full sister won the Fort Worth Open the following year and is now a donor in our program and La Muneca has a full brother to Angelo in their bull battery.

Angelo calves have come small and grown out nicely, we have a couple females that we are developing here in San Augustine and are offering the very first daughter to sell, LMC SSC Ariana as Lot 13 in this same sale. We proudly offer the first 5 units of semen to ever sell on our new herd sire LMC SSC Angelo to benefit the American Simmental/Simbrah Foundation.