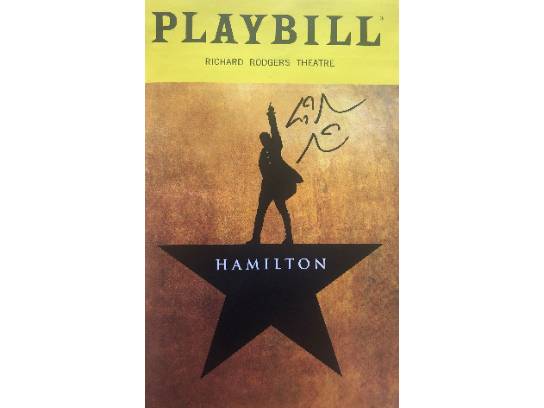 Calling all Hamilton fans! You can have a piece of Broadway history with this coveted Hamilton Playbill signed by creator and star Lin-Manuel Miranda. Hamilton became a worldwide phenomenon instantly when it opened in 2015, earning rave reviews for its unique sung-and-rapped performances, diverse and talented cast, and Lin-Manuel Miranda's sharp lyrics and incorporation of a wide variety of musical genres. It was nominated for a record-breaking 16 Tony Awards, ultimately winning 11, along with the Pulitzer Prize for Drama. In the five years since its premiere, Hamilton continues to be one of the hottest tickets on Broadway and productions have been staged in many other cities along with multiple nationwide tours.

In addition to the Tony's and Pulitzer Prize, Lin-Manuel Miranda has won three Grammy's, an Emmy, two Olivier Awards, and was the recipient of a Genius Grant from the MacArthur Fellows Program. He contributed music to the animated movie Moana, for which he was nominated for an Academy Award and Golden Globe, and starred in Mary Poppins Returns. Next year, the highly anticipated live action adaptation of Lin-Manuel's first Broadway musical, In the Heights, will be released in theaters.